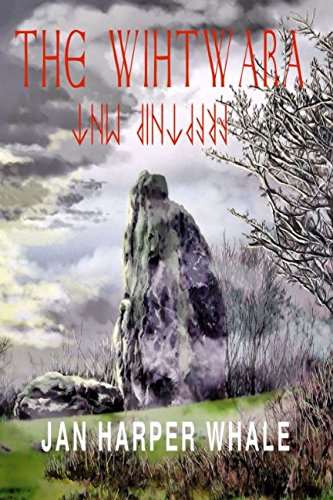 Dagrun Wahl is a young healer/priestess of the Warinni tribe, early settlers on the Isle of Wight, from Germania in the early centuries A.D. They arrived on Britannia’s shores, fleeing from flood and warring invaders in their own land.

In comforting her Ealdmōdor’s dying hours she hears the Last Telling. She learns of the true Royal bloodline to Wōden, the Father of her people. She finds she is an Adept, a spakōna, and can travel on the river of Wryd, to earlier times. She is guardian of the stones. She learns of Wōden and the magick of the Runes. She also learns the terrible fate of her people in future times.

In 686 A.D Wihtland was invaded by a Wessex army, led by Caedwalla, whose true purpose was a land grab and to eliminate the Royal bloodline. Along with Wilfrid, an erstwhile Northumbrian bishop, they used fundamental Christianity as a front to commit genocide on a whole race of people.

There has been a vacuum in the island’s history. Until now, the Wihtwara have been a forgotten people. They were a peaceful people from a rich grouping of seven tribes who had a deep and intricate understanding of their natural world. They were pagan, animists who “put their iron down” in the worship of Folde Mōdor, the Earth Mother, Nerthus, yet keeping Wōden and the northern gods/goddesses within their honouring. It was a time of magick, invocations and hearing the standing stones speak.

Wihtland is the ancient name of the Isle the Wight. It means “Isle of Spirits” and the Wihtwara, “People of the Spirit”. Archaeological, linguistic and DNA research has shown that these migrations of Germanic people from the Cimbric peninsular occurred much earlier than suggested, and in smaller numbers, to Britannia.

Jan Harper Whale has spent years of painstaking research to unearth this missing history. And it brings to light issues we face again today. That religion has been used, and is still used, as a mask to hide greed and an insatiable need for power. In the process, she discovered her name is ancient Saxon, and has a bloodline to these ancestors.

The Wihtwara if the first historical novel in the series, The Wihtwara Dynasty. The second book in the series, Berandinzium Villa follows the descendants of the Wihtwara to new understanding of other religions. Eyvindr, Dagrun Wahl’s brother is witness to the very beginning of Christian fundamentalism from Rome, against Gnostic Christianity. The final book, The Healer Queen takes us to the violent conclusion of genocide at the hands of Caedwalla.

Order this Book via PayPal

If PayPal sends a login error message, maybe you haven't used your account in a while?
You should login directly to PayPal in a new browser-window. Then try your order again. This is PayPal keeping your purchases safe.

By northsylvania, From United Kingdom

Reviewed in the United Kingdom on 13 October 2017

but her bravery and good humour attract powerful friends in both

This book captures an age when physical and spiritual aspects of existence were closely linked and respected equally. Dagrun, the protagonist, lives in both worlds, bringing her insights and visions to bear on the daily life of her village. Her talents, while formidable, do not make her invulnerable to the evil in either realm, but her bravery and good humour attract powerful friends in both. She is an engaging heroine whose story carries the reader through a world that has largely been erased through the forces of Christianisation and modernity.
Through painstaking research, the author has picked out lingering traces of that earlier time in the landscape, and in the few surviving accounts and rituals that were handed down. However, while the academic research is sound, it is unobtrusively incorporated into a gripping story. In the afterword, the author describes the events that led her to write the book. Perhaps it was the immersive nature of her experiences, and her relationship to Dagrun that make the narrative so powerful.
I would recommend this book to anyone who is interested in pre-Christian times in Britain, Anglo-Saxon culture, Pagan ritual, or Northern gods and goddesses. Her differentiation of Odin and Wōden is particularly noteworthy.

By Maurice Bower, From United Kingdom

Reviewed in the United Kingdom on 13 October 2017

A bright insight on the past

Interpretation can be a minefield. What seems blatantly obvious to one person can just as clearly appear to be the polar opposite to another.
Yet some folk do seem to possess a special insight that transcends the obvious evidence to build and flesh out a comprehensive narrative on the framework of the relatively few available clear facts.
You hold in your hands the work of one of such extraordinary insight.
The Isle of Wight is commonly seen as the ‘last Pagan place in England’, although it was briefly Christianised through Roman times before the population returned to its Scando/Teutonic beliefs and finally adopted its last Pagan king.
This sacred land has long suffered the denial of any Jutish heritage, although there is archaeological evidence these peoples long ago were here, as well as in Kent.
The author is a direct descendant. A Wahl of the Warinni tribe. And this gives her an extraordinary lineage on which to draw, a bloodline, as well as insights us mere mortals outside of the tribe cannot really hope to fully comprehend.
Jan - who I have known for many years as a dear friend - presents this tale to you as fiction, but it is far more than that.
She has spent years researching this project, through which we have had very many discussions on the historical and the sacred, and I can vouch for the immense amount of work she has ploughed into searching out as much historical fact as remains. Just as valuable, however, is the extraordinary insight she has brought to this work, to shine a light into the darker and more mysterious corners of the narrative. Giving it life again.
This is a great read, with well-drawn characters, as it is. A class novel.
But if you have an interest in the deep history of our islands - and especially the Isle of Wight - you will find so much more here to absorb you and pique your appetite.

Reviewed in the United Kingdom on 21 February 2018

The TRUE "herstory" of WHITLAND (Isle of WIght)

Absolutely incredible, the most I've ever been carried away by a book in this lifetime! At points it's as if you forget your reading as your fall through the pages into a time long passed! ...This book gives the chance to travel back in time to see the World as it existed before money/pollution, when people still lived in harmony with the land rather than against it!
If you love vikings, have an interest in earth based beliefs, indigenous ways of living, if you find wisdom in learning from our ancestors, then this book is for you!
The author has an amazing sense of balance between the fictional story, and the factual "herstory" that it's based upon.
You really learn a LOT without even realising it, I'm even noticing that I can now recognise a lot of the old language used throughout the book! LOVE! LOVE! LOVE!
Jan Harper you are SO insightful and have quite literally blown me away! I look forward to the next one!

Reviewed in Spain on 24 March 2018, Translated from Spanish by Amazon

As I was born on the Isle of Wight I find the book interesting, but I still have not finished it.

Lots of misspelling and typos in my copy, but I like the story.